I'm sure I'm not the only one who finds buying presents for men (specifically: boyfriends) hard. With this in mind, I've compiled a little ethical gift guide for men. I'm not really one for buying presents-for-the-sake-of-presents, but these gifts also give a little bit back to the world, which is a nice idea.

Any man that receives any of these things is luckier than my poor old boyfriend, as I'm sadly not quite rich enough to afford them on an intern's wage. But it's the thought that counts, right? Sadly the Dr Who hand-knitted scarf that has been requested several times is several years from completion (not started). 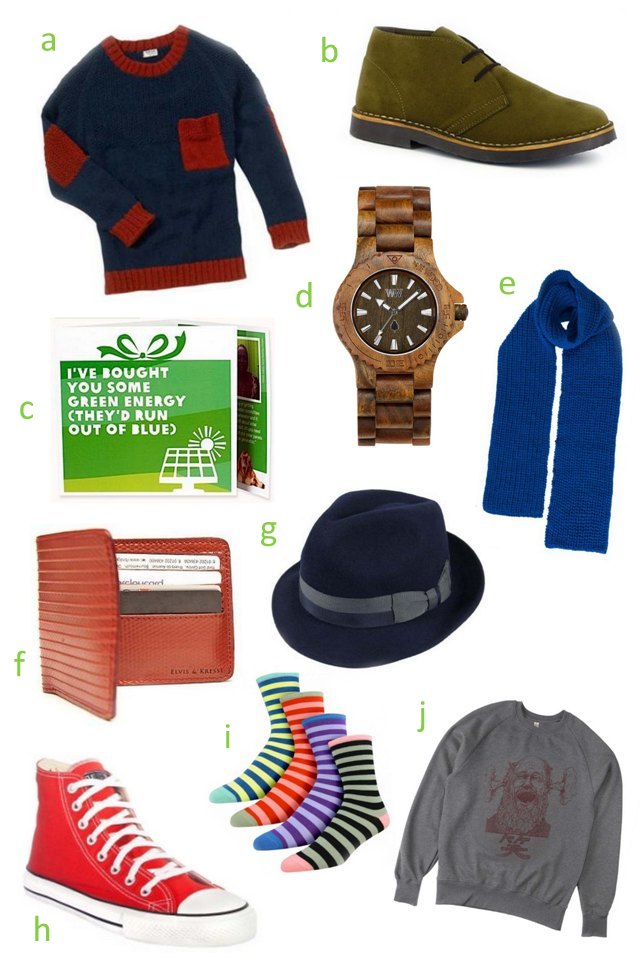 ...although perhaps that amazing Pachacuti hat can count for Christmas and birthday? Hmm!

Any tip-offs for other great ethical gifts? Send them this way!

Updating an old blouse with buttons... 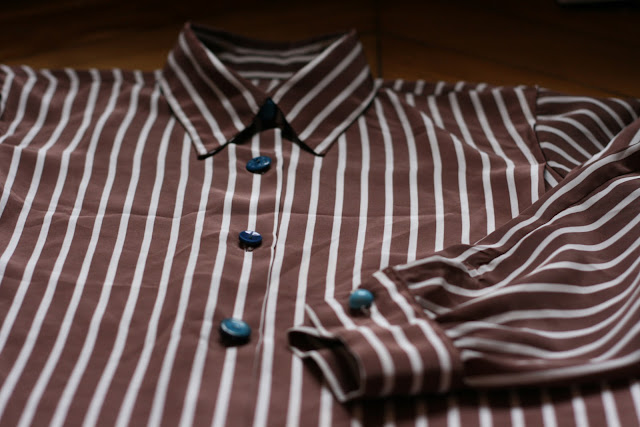 As you may or may not know, I'm a contributor over at the Oxfam Fashion Blog. This week, I upcycled a blouse using some vintage buttons. To read more, click here!

'The Life of a T-shirt' Infographic

Infographics get a lot of stick nowadays, but there are still some that are definitely worth seeing. I think this one quite accurately describes some of the reasons why I think twice about buying something new - namely water and pesticide consumption. If you stop and think about it, it's pretty shocking how much goes into one t-shirt, bearing in mind just how many the average shop stocks.

Thanks to the Urban Times for this infographic, produced in collaboration with TextƧure.

DIY: How to make pompoms! 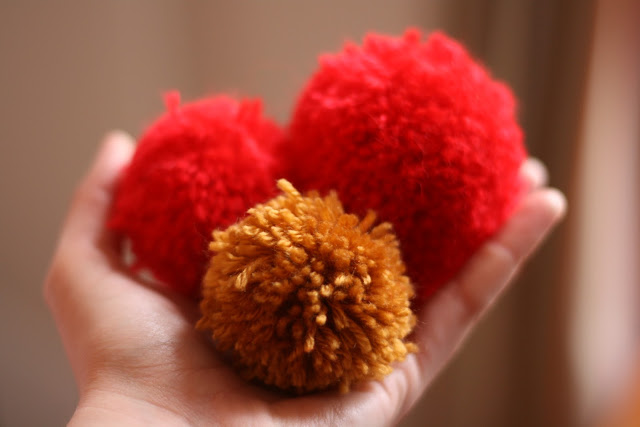 For some unknown reason, I recently had a massive urge to make pompoms. This is an activity I used to do with my mum when I was little, and is surprisingly easy (the proof: a 6 year old me could manage it!). I picked up the wool at the largest charity shop I have ever seen, Emmaüs, in the 19th arrondissement here in Paris. But more on this incredible shop another time. The balls of wool were 50 cents each as they were partially used, not that that even matters... making for a very cheap and fun little DIY! 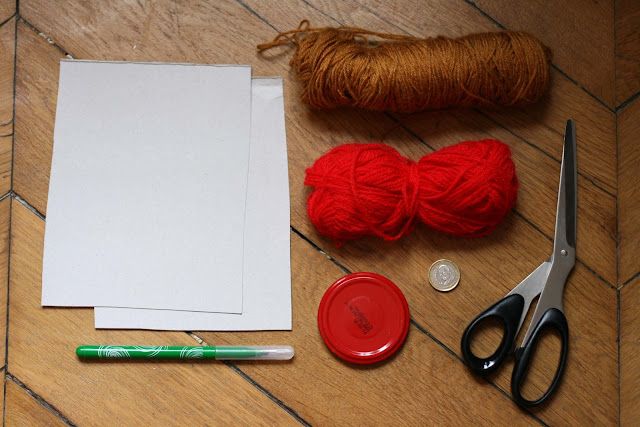 You will need:
Wool

Method:
1) On your sheet of cardboard, draw around the jam jar lid twice. 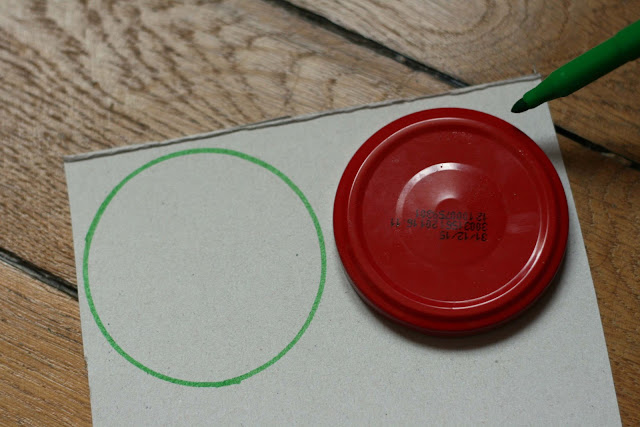 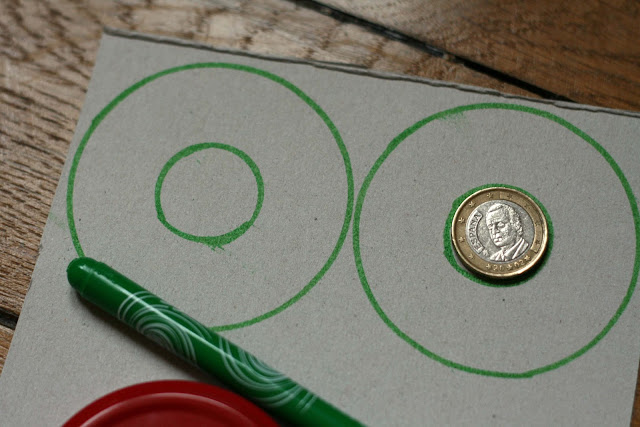 3) Cut the shapes out 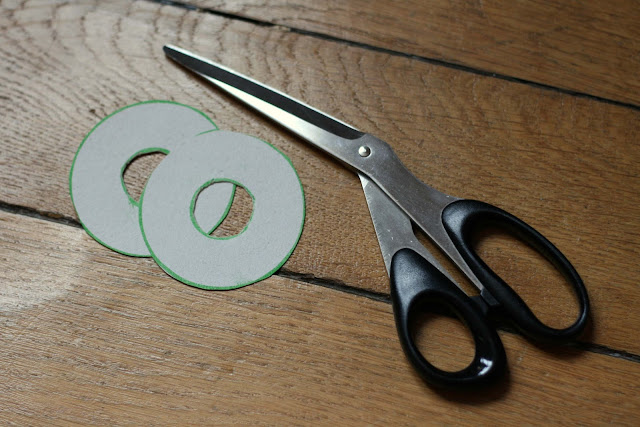 4) Place the circles one on top of the other, and cut out a little wedge shape. This is a sneaky trick to make the process a bit quicker, but if you want a more even pompom just leave the two circles intact. Basically, this wedge method means that you don't have to awkwardly pass the wool through the small centre hole every time you wind. 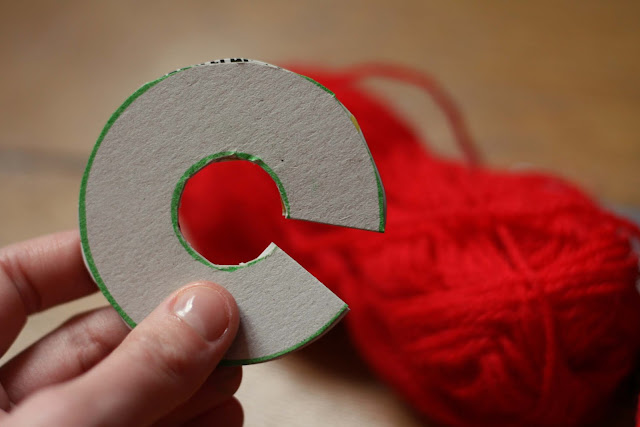 5) Start to wind your wool around the two layers of cardboard. 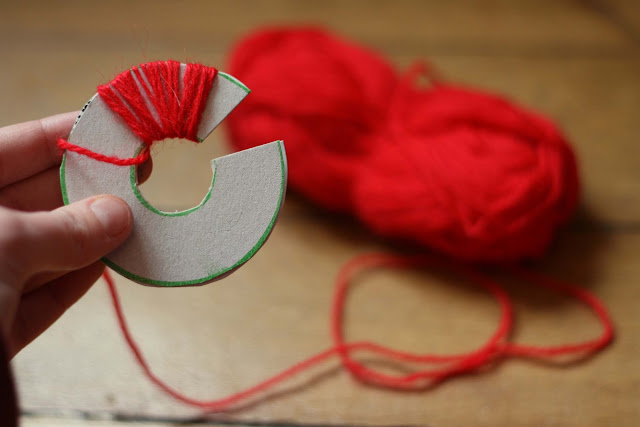 6) Continue until the whole thing is covered and is several layers thick! 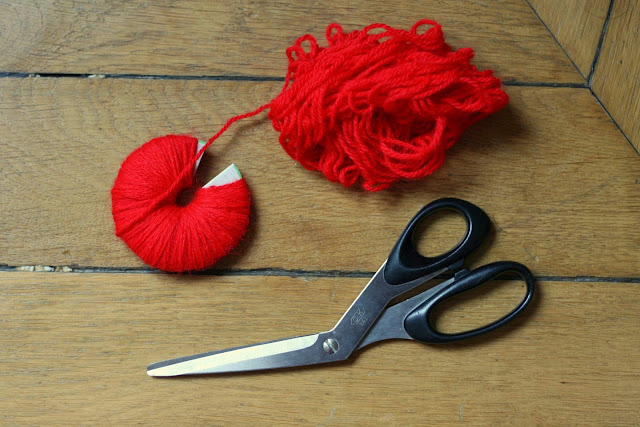 7) Take the scissors, and poke the end in between the two pieces of cardboard. 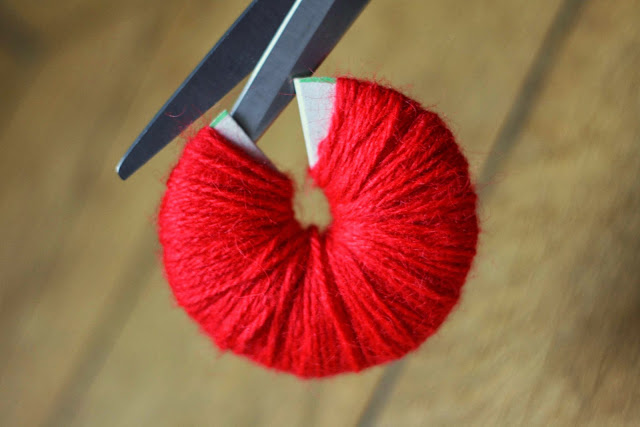 8) With the scissors between the two pieces of card, and with a firm grip on the centre of the pompom, cut all the way around the edge. 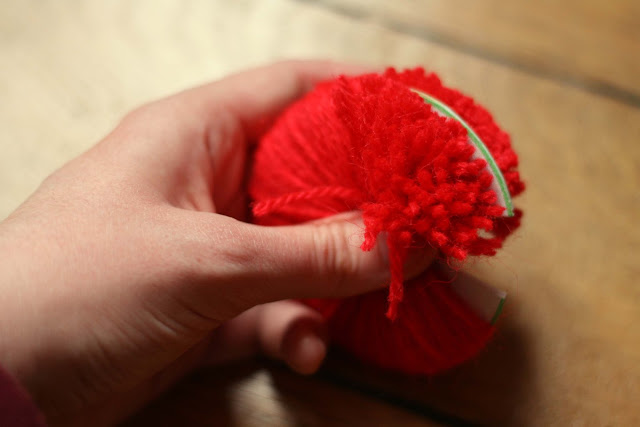 9) Thread a length of wool around the pompom, between the two pieces of card. Tie it in a tight knot as close to the core of the pompom as possible. You can repeat this a few times for extra pompom security. 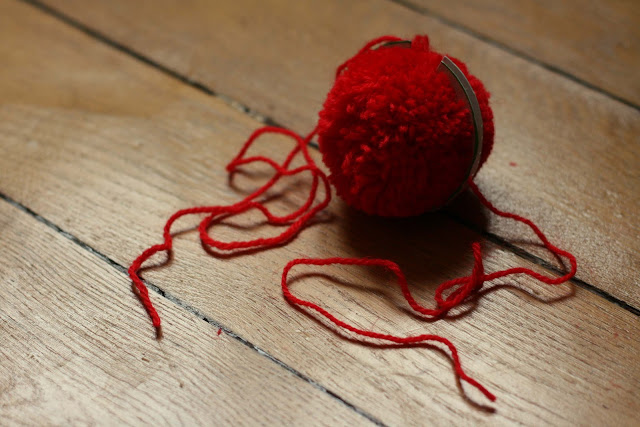 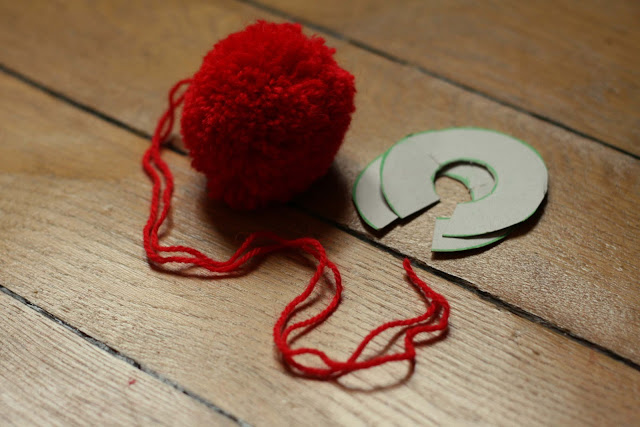 And here's one I made earlier... 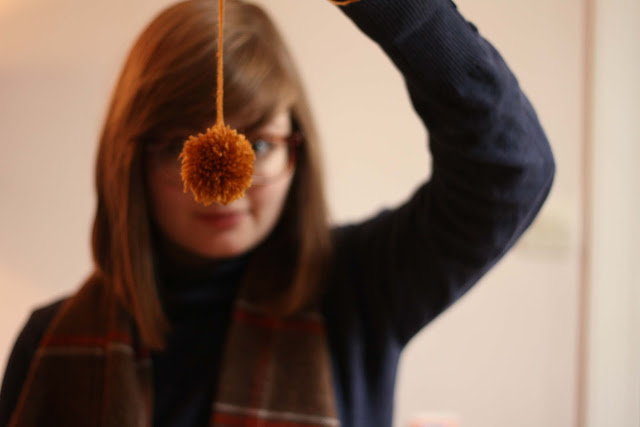 'But why would I want a pompom?', I hear you ask! Well, there are a million uses for a pompom and they are definitely 100% necessary as general household decoration, fashion accessories and finishing touches for all manner of customisation projects. If anyone has any fantastic suggestions, please feel free to mention them in a comment!

A bit of a 'relooking'

'Relooking' is my favourite new French word... their bizarre version of 'make over'. You can pay extra money at the hairdressers for a 'relooking'. That is, if you're particularly brave. I personally don't fancy a makeover conducted in a foreign language.

Haircuts aside, I decided that it was high time my blog had a little change of design, as the old one feels just as stagnant as the frequency at which I post. In theory, this will motivate me to post more, but we shall see. I really want to get back into blogging properly, although whether or not this will actually happen is another story of course! This makes it sound like I don't enjoy blogging anymore, which is definitely not true (if it was, I'd just stop!). Thankyou to anyone patient enough to stick around despite the giant tumbleweeds rolling across my section of the internet.

I'm fairly pleased with the new design, but if anyone has any constructive criticism please feel free to let me know! I literally just discovered the benefits of .png files, making everything look a bit sleeker than before (I hope). However, after battling with Photoshop for more time than is acceptable, I took to my old friend MS Paint to do most of the graphics. Such a professional. Shh.

Anyway, I've also got a snazzy new matching Twitter account, which has somehow gained a load of followers all of a sudden. You can find me here: @sadieswardrobe

I'll hopefully be back soon with some actual posts. 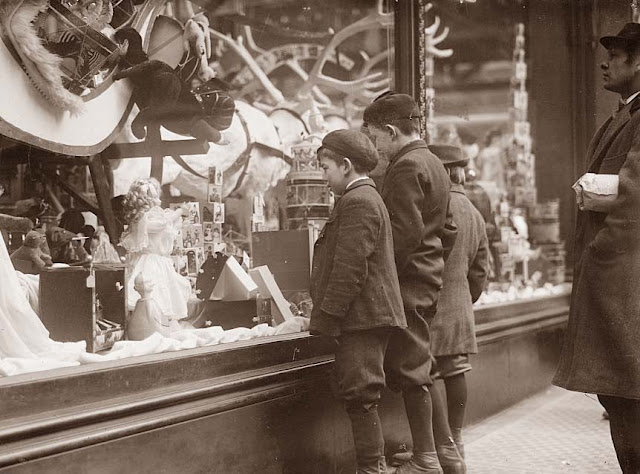 I'm sure I'm not the only one who loves going clothes shopping on a Saturday. The day is just made for shopping; it's the end of the week, and you fancy a treat as some sort of recompense for all the hours you've just spent in an office replying to emails (about products). I'll stop there, as it's beginning to sound like a complete parody of modern life...

Anyway, since deciding to start shopping ethically, I've been in a bit of a dilemma. My flatmate has an interview coming up, and wanted to go shopping for something special to wear to it. As we are neither rich, nor do we have good access to ethical SHOPS here (they're mostly online), this meant visiting some of the finest fast fashion shops on the Parisian highstreet/boulevard. The sort that change their entire stock 12+ times a year, produce tens of thousands of each piece, and appear to be gradually phasing out important quality-indicators like lining.

Whilst the magic of shopping at places like this has worn off slightly, I still love a good old window shop/trying-on session/coo at pretty things. Whilst I do worry that this is all still supporting something I don't agree with, even if just by being tracked by a customer footfall counter on the door, I fundamentally DO still enjoy looking at clothes when I put my other concerns aside.

With this 'you can look, but you can't buy' attitude, I've also started to notice things that I wouldn't normally buy, so in a sense, it's making me more fashion aware. I can't really decide if this is good or bad though!

What does everyone else think about this? I worry that if I start boycotting certain shops I'll start to feel left out of girly shopping trips, but on the other hand I don't like the idea that I'm still supporting the shops themselves. 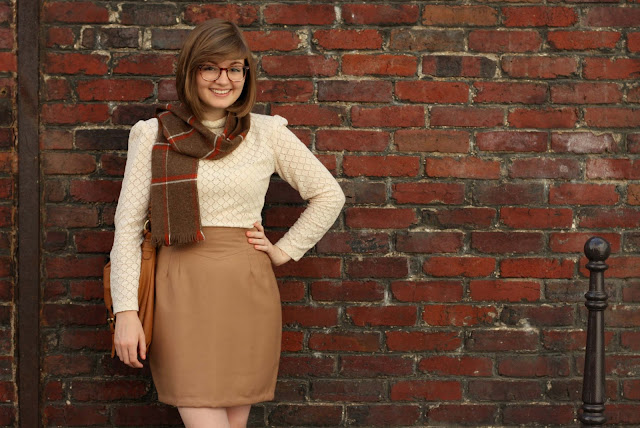 Woooops, it has been a long time since my last post. I've had this one lined up for a while (can you tell that the photos were taken at a warmer time?) but between working and doing Parisian things, actually posting sort of slipped my mind. For example, I went to the café where parts of Amélie were filmed the other day, and had my first ever crême brulée. Then I went back for another one. So you can see that I've been doing very important things with my time ;).

Two new items in this outfit were sourced from my new favourite Parisian shopping destination, Guerrisol, THE place to go to satisfy all of your thrifting desires. Inside each Guerrisol shop await mountains of second hand clothing to sort through (you can tell who is a seasoned Guerrisol shopper; they always work so systematically). I bought this skirt (€5) and scarf (€3) back in August when I met up with Lyzi and Ella for a day of thrifting, visiting the various Guerrisol shops scattered around northern Paris. Lyzi picked up this pretty pink skirt!

Whilst it's not quite a charity shop, I love the fact that Guerrisol helps recycle clothes and sells them on at an affordable price. The shops are stark and unpretentious, a nice break from the usual in Paris. But that doesn't mean that some of the chic Parisian bloggers haven't sung its praises! 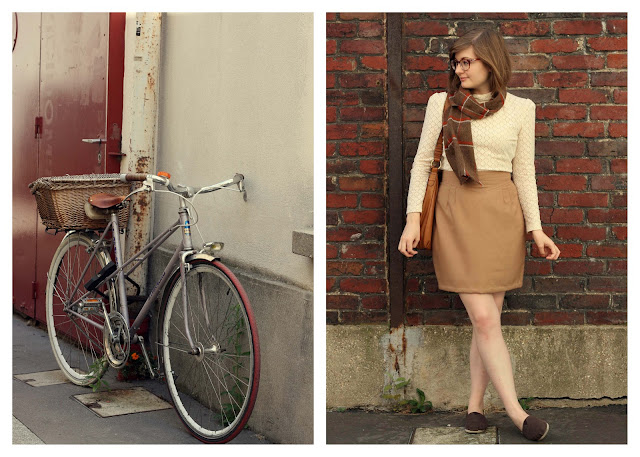 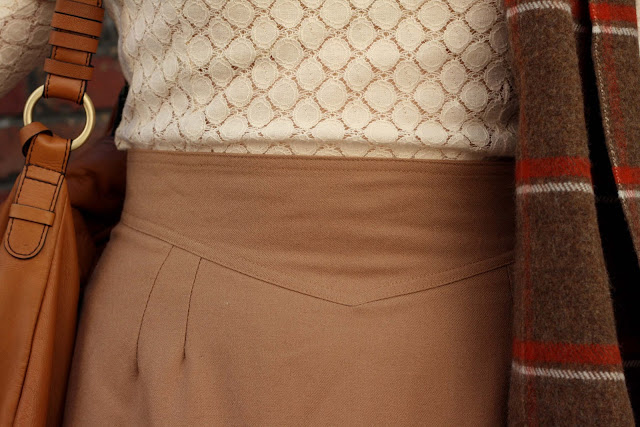 So if you're out and about in Paris, don't forget to add Guerrisol to your list of shopping destinations - it should be right up there with the vintage shops of the Marais.

P.S. Who could resist posing against what appears to be the only red brick wall in Paris? Not me!
Posted by Sadie's Wardrobe at 17:30 9 comments: 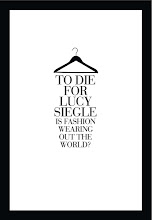